If the first week of our Tour de France had been cruel on the cobblestones of the North, in the second we took a nice breath of fresh air. Two stage wins in Lausanne and Chatel. Difficulties in the high mountain, of course, but a 4th place overall behind the two Slovenians and Vlasov. So there will be only one goal for the Pyrenees: knock Vlasov off the podium to do better than last year.

From the beginning, we put ourselves in the Mende.

The final sprint starts in Lozère, at the top of the Croix Neuve climb aka the Laurent Jalabert climb (what a bad memory). But in our quest to play on the podium at any cost, we get a little carried away. Futile attacks to end up crashing at the end, seeing Vlasov overtake us and lose precious seconds again. The strategy needs to be revised quickly.

I might as well tell you. Once back on the team bus, we got a good whistle from Marc Madiot. What is this small attack worthy of a village criterion? We are here to make the Tour podium. So, Carcassonne-Foix, we have marked it well, and we will make sure that things are done well.

We hold the wheels well during the whole stage, and attack the very steep parts of the wall of Péguère, accompanied by a certain Alaphilix (probably Alain Philippe’s cousin). The goal is clear, clean, precise. Pardon the vocabulary, but Vlasov needs to fart, even if that means bluffing properly. Small attacks of breaking legs, and a fatal one 1 km from the summit. Vlasov let go. In our step, the 2 Slovenians of course, but we don’t do the same trick. We pass 1 minute ahead of Bora’s cyclist.

Another problem, now you have to go down 25 kilometers to the finish line. There is no way to waste a single second. Let’s play the general, the 2 Slovenians on stage. Suffice it to say that we can prepare to wait for the slightest relief from their 2 slackers, it’s up to us to set the pace, about to break. So it’s no surprise that we got smoked in the sprint in Foix. But a minute of recovery in Vlasov is far from a luxury. Especially since we now understand that it is acceptable. 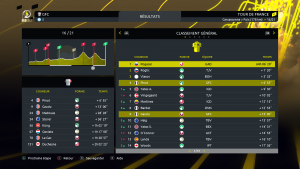 Life is sometimes played out in seconds

So to tell you, we are focused like never before. We have closed the bedroom door and set airplane mode for this Saint-Gaudens – Peyragudes stage. That’s fine, it ends on a plateau. Altiport where a scene from Tomorrow never dies. So much for telling you that we are also in an action movie. And the first cliffhanger, is to see Vlasov let go much earlier than you might imagine: at the start of the ascent of the Val Louron-Azet pass.

Not one or two, we can clearly see that a vacuum is being created to roll like crazy the little prince of Brittany David Gaudu. We still have the armored force, the objective here is to destroy the enemy’s hopes. To make sure we are no longer a tiny dot on the horizon. And it works, the minutes pass. Good little problem, there’s still a hill to climb and it hurts the thighs.

The seconds between us and him lengthen, minutes pass. Problem, we release a lot of energy, but who cares. We are not playing here to win, we are in time trial mode. Which, in retrospect, is potentially a shady idea. The Yellow Jersey group let us go quickly on the last climb to explode (like everyone else) in the last hectometres. A magnificent failure of families that we invite you to relive below.

The arrival is lactic. At PLS on the sides of the altiport, we hear in the distance Alexandre Pasteur start the clock. For our part, we knock out the soda to recharge the batteries before waiting for the fateful result. And it will be exceptional. For 3 short seconds we climb the podium. France is in a trance. 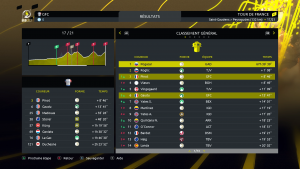 But it goes without saying that resting on your laurels would probably be a bad idea. Hautacam awaits us the next day, and on Saturday there is a time trial. No matter how much I tell you, every new second won will be a victory.

And it is exactly the opposite that will happen on the ascent to the Spandelles pass. We suspect that Alexander will try something. A good strong attack, so we say we will take Tadej’s wheel to come back easily without spending too much effort. What a rookie mistake. Add to that your dedicated editor making his descents like a Zakarine, we are in a potato hunt between the Vlasov group and the yellow shirt group.

We can’t collect the Russian, we have to decide that the group in yellow and green jerseys will return.

Oh yes, Roglic is green by the way. So this is what we call the multiverse.

But the last climb will be epic. Let me tell you, we did it with Gladiator music in our ears.

Pulled by Landa and then by a push from Pogacar, we return to Vlasov’s group. And now, coconut, it’s no longer about giving him the chew. Pogacar flees alone, Roglic takes the train to return. The pace is so intense that we all probably know we’re going to break at some point. The only goal is to do it after Vlasov.

2 kilometers from the finish, we think it’s the end. We only have red energy left. The one of courage. But it is exactly at this moment that Alexander staggers, zigzags. IT BURNS There is no time to get tangled up, let’s enter the wheel of the Landa, take the rest of the energy gel and go boldly. Teeth clenched, we take 16 seconds from Vlasov at the top. A huge capital and so small at the same time for the time trial of the past tomorrow. 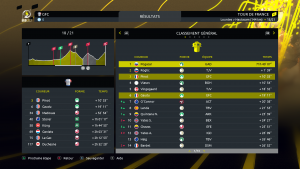 The most important time trial of all life

The silence is dead before the departure. There is no question of messing around. There is no doubt about taking the 4th position again. We screw on the helmet with more vigor than Roglic’s, and climb on.

A pretty flat CLM, in the end. I’m told in the headset to save some for the end, so when I’m wide in front of the first intermediate we start to hesitate. Did we put too much? Will we experience a desire for families? Is the universe infinite? Thousands of questions run through your mind. A bit of a strange finish, with lots of guys in the middle of the road, including obviously a guy with his Breton flag that I almost miss touching. You must have confused me with Gaudu. The end is frustrating, we had some left in our legs. Vlasov’s result remains to be seen. 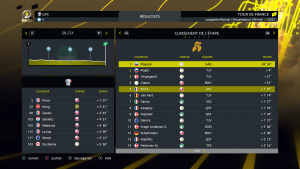 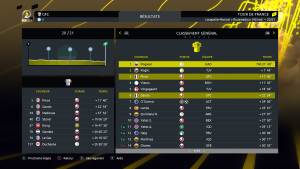 For 5 seconds. For 5 short seconds, it happens. Over 76 hours in the saddle and everything is played for 5 seconds. Laurent Fignon is avenged.

And whoever says Fignon, obviously says the Champs Elysees. And this year, no mass sprint, no. A breakaway that chews up the sprinters with Luis Leon Sanchez winning ahead of Simmons and Barguil. Because why not.

An unexpected and deserved 3rd place behind Pogacar and Roglic. Primoz who wears the green jersey (hehehe) and Esteban Chaves, who was not in the actual lap this year, end up with the polka dot jersey.

And an equally strong team record. See you next year! 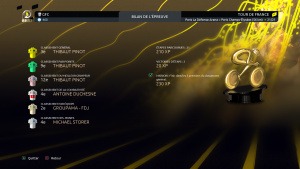