Twenty brands distributed millions of treats across the 21 stages of the 2022 Tour de France.

TOUR DE FRANCE – The Green Tour is not yet for this moment. Zero plastic campaign and hybrid or electric cars: Amaury Sport Organization (ASO), the organizing company of the Tour de France, has, however, accelerated its ecological ambitions for this 109th edition that ends this Sunday, July 24 at the Champs Elysees .

In a decade, the Tour has curbed pollution. In fact, the race’s CO2 emissions have fallen by 40% since 2013. To avoid littering in Natura2000 areas and nature reserves, litter hunting carries financial and sporting penalties for recalcitrant competitors. The Tour has even addressed indirect sources (responsible for 94% of pollution), in particular spectators.

“We are delighted to have an audience, but to reduce the overall carbon footprint of the tour, we are now obliged to act on the emissions of spectators,” he explains to the HuffPost Karine Bozzacchi, head of CSR (corporate social responsibility) for the event. The aim is to encourage fans to come outside the car, now 50% take their personal vehicle to get there. Among the solutions offered by ASO: bicycle parking at each stage, a car sharing page available on site and TER tickets offered at advantageous prices.

It is understandable that in this context the controversy over the watering of too hot bitumen harms the organizers. However, they are not the ones with the most work to do. The partners of the Grande Boucle are even further behind, with one of the traditional attractions of the Volta in particular: the caravan and its distribution of gifts on the way to the race.

Haribo, Cochonou, LCL, Cofidis, Continental: twenty brands and companies distribute almost 18 million treats every year. Among them, the indispensable “bob” with the colors of the sausage brand.

Most of the time, small size, key chains and other plastic gadgets are thrown on the go by the vehicles in the colors of the partners. Bags of candy, key rings, colorful gadgets… often poor quality items made in China that end their lives in our garbage cans or on the side of the road.

What to stain at a time when major sporting events highlight their environmental protection measures. The Giro, the famous Italian race and its “Ride green” program, Paris 2024 and its “Committee for the ecological transformation of the Games”, to the world football championship in Qatar with the ambition to be carbon neutral. .. the most popular. cycling race must also make its ecological assessment.

Faced with this observation, ASO asked its suppliers for new, more “durable” and “useful” gadgets. “We have many novelties such as wooden key rings, or with more responsible materials than plastic. And also more goodies that are bob-type textiles, caps, t-shirts that people can reuse,” says Karine Bozzacchi.

But not all partners advance at the same rate on the issue of plastic. E.Leclerc has developed paper packaging, Cochonou uses recycled plastic, while Haribo continues to distribute plastic candy bags. “I think it’s a matter of time, Leclerc has already taken the step, Cochonou is halfway there and Haribo will surely get there quickly,” continues Karine Bozzacchi optimistic about the future progress of the partners.

Other sponsors go even further and launch into a litany of action pledges. But it’s hard not to see greenwashing. Cochonou, for example, is committed to planting 120 trees to offset the carbon footprint of its seven vehicles.

The HuffPost tried to contact the group’s CSR to find out if this “reforestation” campaign had taken place. Messages went unanswered. Then, on Instagram, the company finally responded: “this project hasn’t started yet, but have you seen our latest announcements about Tour engagements?” 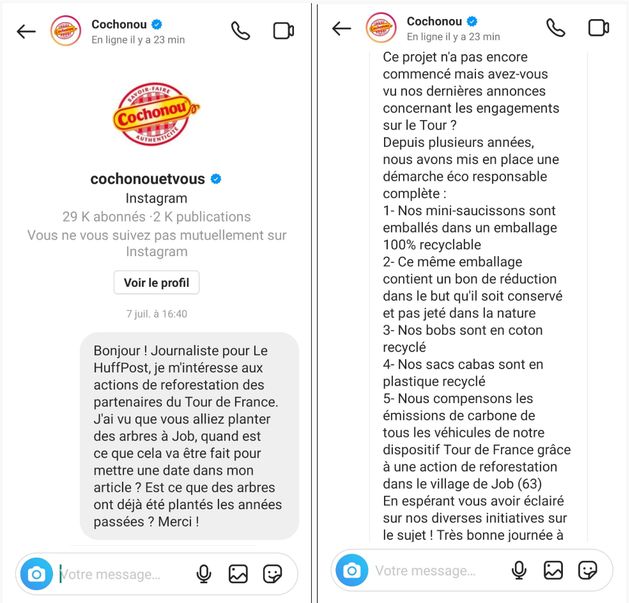 Exchange on Instagram with Cochonou about his reforestation campaign.

Elegantly dodging the question, Cochonou remembers that his legendary bob with red and white gingham checks now it is made of recycled cotton, the shopping bags are also made of recycled material and the t-shirts are distributed “made in France”.

Progress certainly, but can we really talk about a “commitment” in favor of the environment as ASO does? According to the criteria of the French Energy Management Agency (ADEME), this type of campaign is very similar to greenwashing, that is to say, it shows an environmental policy with mainly promotional purposes.

Because if there is marginal progress with the partial replacement of plastic packaging, the central problem is always the same. Thus, Ademe asks companies to “avoid the use” of these promotional gifts whose “real utility often remains to be demonstrated” and whose useful life is very short. After picking up a Cochonou bob to protect you from the sun while watching the runners, do you take it off regularly?

And the agency explains the point: “The use of the ecological argument when the interest of the product or service for the environment is minimal, even non-existent”, therefore falls under marketing. In other words, greenwashing.

As for the radical solution of ending the caravan, it is not possible: “Such a measure would go against one of the three pillars of the tour, performance, party and utility, therefore the celebration is the caravan”. Karine Bozzacchi answers. Yes, the runners are not the only attractions of the Tour. According to the organizers’ figures, 46% of people say they come to the side of the road for the caravan, so the end of the treats is not for tomorrow.

To see The HuffPost: Find out which stages of the Tour de France 2022 you can’t miss