With the F1 season in full swing and Verstappen leading the standings, we look forward to finally trying out the new Formula 1 cars. After the catchy video of Miami’s new circuit, which is of course available on Xboxygen’s YouTube, The wait seemed endless but finally, we can start reviewing the official circuits of the current world championship! Electronic Arts acquired Codemasters a year ago, the new racing game is aptly called F1 22, like the other sports games from the California publishing house. F1 22 will be available on July 1 and, as every year, the lucky owners of the Champion Edition will have three-day advance access on June 28. Has Codemasters been able to faithfully transcribe the circuits, the F1s and their behavior? What are all the new features of this new work? To find out, turn up the volume and go to the first corner!

It all starts with a nice presentation of the new game center, the F1 Life Center. Here you can admire the supercars from our collection, visit a virtual showroom, access our trophy window and see the highlights of the races again from a projection room. It is also possible to customize our avatar as well as the environment of our F1 Life, and perhaps receive Likes from our friends who come to contemplate our space. For information, supercars can be exchanged using tokens, which are obtained by completing the objectives of the game.

The time has come when we can customize our avatar! No less than ten brands are present, such as Sparco, Puma, Beats or Kicker, to name just a few. You are free to draw from their catalog to equip your character with various cosmetic items. Of course, you have to pay in Pitcoins to benefit from it, we told you that EA had been there, and also its monetization in the game … As for the game menu, it’s simple and you won’t get lost looking for the race or multiplayer modes. The “Breaking Point” story mode introduced last year and in which you could live the adventures of Aiden Jackson is being removed to be replaced by Pirelli Fast Laps mode. The concept is simple, we have to get feats behind the wheel of supercars on defined routes. Unfortunately, we can not choose the different mounts, because the game imposes them Here are forty challenges with three levels of difficulty each, all in portions of real circuits, ranging from simple time trials, drift, control points, speed average. , rival duel or even autocross. For the other single player modes, nothing changes, the Grand Prix and Time Trial are still available. A small novelty also in the time trial, we can discover the circuits behind the wheel of the supercars we have unlocked, as well as that of the official security cars. Honestly, it doesn’t make much sense to be able to drive these types of cars, other than to be able to realize why Hamilton is constantly complaining about the low speed of the safety car. It’s time to get into Race mode, so let’s put on the harnesses and lower the helmet visor. There too, nothing new, we can choose to run alone or with a friend by our side, either on split screen or online. The solo race offers us two modalities, the first will be the pilot race where we focus only on driving and contracts, with the possibility of starting in F2. My Stable mode is also always present. For the duo race, there are always two possible modes, the first is the Contracts mode, which allows both players to choose their stable contracts independently, and the Coop mode which will force the two players to remain teammates. equipment.

For this test, we will focus on My stable mode, which for us is the most complete mode compared to previous games. Let’s start with a novelty, the possibility to choose between three difficulties. The first, Bleusaille, proposes that we start with a minimum of budget funds and very basic development factories. Rising Star simulates taking possession of a mid-table team, while for Head of Race we acquire a first-class team.

Altogether, the dialogues, sponsors, creation of logos, tables and animated images of the infrastructures, etc … Almost everything is identical to what we saw in F1 2021. Only the car (fortunately) is different, as well as the different development parts. , although the principle is identical to its predecessor. If you were waiting for a full review, you will be disappointed. Despite this, the game is still addictive because we like to manage our entire team. The improvements to our mount are just as pleasing because we immediately feel them in their behavior. For those not started in this mode of play, it should be understood that the pleasure of being able to win races with one of the best F1 cars on the board will be achieved in the long run, after several years of development, especially if the difficulty Bleusaille is chosen at the exit.

The time has finally come to address the most interesting, the pilot joystick and felt and the steering wheel in hand, because yes, the test will be done with the two peripherals. To do this, we directly compared F1 2021 and F1 22 (thanks to the Quick Resume), with identical circuits, car parameters and driving difficulty (manual gearbox, without ABS and intermediate traction control). New cars seem more reactive in their behavior, particularly facilitating braking phases, and therefore overtaking as well as turning sequences, but be careful, you will have to learn to drive again. In fact, where the previous year’s cars were undone with a slight understeer, the 2022 versions have more oversteer, especially at the top of a gear, forcing the driver to manage their trajectory with more delicacy in the curves as well as the accelerator, especially on the joystick. At the wheel, to have good weather, you really need to calibrate a very light slip in certain turns, which will bring you smiles and satisfaction! If the F1 2021 did not forgive the sliding phases of the rear axle, this year the control of our car is more realistic, after a few hours of training of course. However, the sliding effect decreases very strongly with maximum traction control, so all players can be taken by Michael Schumacher. Now let’s talk about what’s new on the track. First, for tuning fans, the aileron pitch settings range from 11 to 50 and air pressures from 21-25 PSI to 22.5-25 PSI. The other parameters do not change.

From now on we can also damage the sidepods (the sides of the car), which can cause an overheating of the engine and, therefore, a great loss of power. If we rub the sidewalls of the tires too much, punctures will occur more easily, forcing us to return to the pits immediately. This damage will not be a problem, if you play without damage, of course. Also for the news, we saw that it was possible to activate an option that offered us to stop manually on the grid after the training lap. If we stop too early, we waste time during the start, if it is too late a distance penalty applies. Seeing that we could no longer have assistance during pit stops, we rubbed our hands in hopes of finding the paroxysm of the simulation, but in fact it was a cold shower. This option only requires us to press a button at the right time, in order to turn right in front of our box. If we don’t press at the right time, the action takes place anyway, followed by a short penalty. The braking in front of our box is always automatic, too bad …

The sidewalks have been lowered, which is great because last year for the most part it felt like sidewalks. However, great care must be taken because yellow sausages, which do not forgive excesses, never far exceed the acceptable limits of the track. Finally, let’s talk about last year’s real black spot, AI. The F1 22 is, on this side, a real success! There are no more races where opponents followed one another, especially in the rain. There are no longer completely stupid robots that let themselves move forward without trembling. From now on, you’ll have to be patient before you can move forward, and you can’t imagine your opponent letting go. When we have the DRS open and the ERS full, it changes to prevent us from regaining its position, even going so far as to force our tires to bite the grass. We will have to be cunning in braking, and in spectacular overtaking. Realism reaches its climax when opponents are continually attacking each other, as if we were watching a grand prize on television, which sometimes leads to a safety car exit.

As you can imagine, we will now address the topic of the soundtrack. What would an F1 game be without commenters and especially without our engineer? This year, the charismatic Canal + commentator, Julien Fébreau, is back. Nicolas Martin is replaced by Jean-Eric Vergne, former F1 driver converted to Formula E and endurance driver in his spare time … Finally, we still have the voice of our engineer Jeff, who accompanies us during our races. As for the sound effects, there’s nothing to complain about, it’s out loud. As for the soundtrack of the menus, we immediately hear the leg of EA, because musically speaking, it feels like a FIFA. As in all games from the American publisher, we have the option to create our favorite playlist in order to enjoy a little more of the menus, or while walking through Vie F1. If you think the graphics of the F1 2021 were beautiful, the incredible fluidity and the details provided to the cars and the impressive circuits, well, you will not be disappointed. This year the game is magnificent, especially in the rain so much so that one could believe that F1 2021 was a draft. HDR does its job perfectly and we still have the option to choose between a performance or quality graphics priority. A little tip, you can take the smoky visors out of their storage boxes because it will surprise you. We also have a little information for PC gamers, you have the opportunity to play the whole game in VR: good luck! 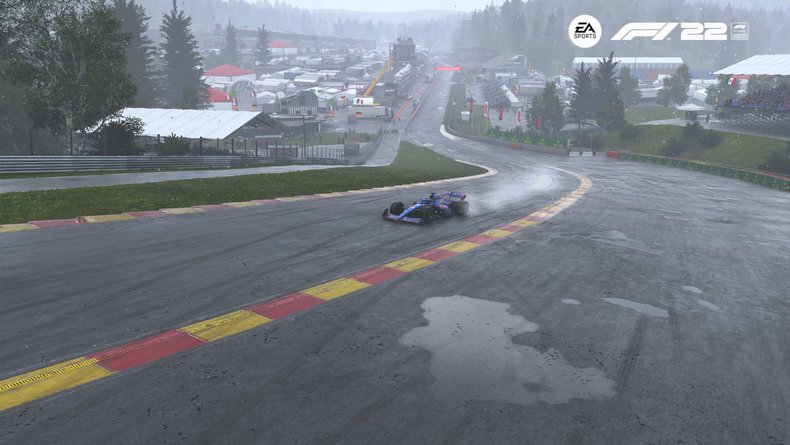 For achievement hunters, most can be unlocked in My Stable and Multiplayer modes. You’ll have to be patient, especially for “A Good Ending,” which is unlocked after completing 100 multiplayer races.

Tested on Xbox Series X with the Elite 2 controller and Thrustmaster TS-XW Racer.