First season of South African Super Rugby clubs in the United Rugby Championship. And already a 100% South African final. The Cape Stormers host the Pretoria Bulls this Saturday at 7.30pm (on RugbyZone TV), for the first final of this new competition. The Bulls, winners of Leinster in Dublin in the semi-finals, surprised observers. Above all, his victory called into question the level of play of the competition. The Irish, big favorites in the title (winners every season since 2018), and former favorites in the Champions Cup, fell at home against Jack White’s men, who were able to impose their physical density and completely frustrated those of Leo Cullen.VIDEO. The nightmare continues for Leinster, eliminated by the Bulls in the semifinalsSo what about this URC final and what can it mean in the Champions Cup? Because if the South Africans had trouble starting the season, they were able to knock down two top names in the semi-finals. And his future Champions Cup presence could upset the current hierarchy, where Toulouse, La Rochelle and Leinster are above. In addition, with the format of the contest. With two groups of twelve teams and the top eight from each group qualifying for the final stage, the passage to the round of 16 is easily accessible. However, for knockout matches, South Africans have a weight advantage with their physical density and excellence in direct conquest. Sectors where Leinster got into big trouble in the semi-finals of the URC. With four touches lost and almost none of them assured, Leinster could not start their game and thus try to overwhelm their opponent. The Pretoria Bulls have consistently focused on direct conquest and clash zones to win in Dublin. 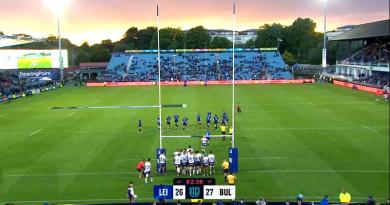 Les Rochelais showed the Bulls how to beat Leinster according to the foreign pressAlthough a European Cup title requires more than a good win, the game tends to fly in the final and remain a physical commitment. If La Rochelle tried to send the match away, it was in force twice at the end of the match, in the final in Marseille, which managed to win its first European star. Needless to say, South Africans excel in this sector … In addition to sports, logistics will be severely affected by the integration of South African clubs. The president of the National Rugby League, René Bouscatel, also explained to the Var Matin columns how the club’s movements were taking place:

Four of the eight French teams qualifying for the Champions Cup are expected to travel to South Africa. And these will only go once. Of course, in the Top 14 we will have to find the most suitable times with Canal + so that our players can resume in the same conditions as those who have not traveled … In short, he imposed it on us, but I think this is good . And we also look forward to playing in a Club World Cup in 2024 or 2025. No date added. We will find a formula for this, in order to promote club rugby in Europe and, little by little, in the world.

Regarding the controversy over the integration of these new clubs, Bouscatel recalls that since 2014 and the creation of the EPCR, the situation has changed for the organization of European competitions.

This was voted on by the NRL committee before my presidency. But you have to do a little education. Initially, the European Cups were run by the six nations (France, Italy, Wales, Ireland, Scotland and England). And then there was a change, when the organizer of the competition became the EPCR (in 2014): the organization no longer depended on the nations, but on the three competitions (the Celtic League, the Premiership and the Top 14). Except that the new Celtic league has integrated South African provinces independently. Therefore, if the latter play this competition, participate in the European Cup qualifiers and qualify among the qualifiers, it is normal for them to be integrated into the competition. It is relentless.

Sporty relentless. While a hegemony of French clubs seemed to be emerging from 2021, can South Africans shake things up and take over the competition?