Do you know Anton Palzer, a 29-year-old runner from the BORA – Hansgrohe team? Given the discretion of the results of the Austrian climber (no top 20 in two years of racing), we reserve this attribute for the most regular fans. On the other hand, you can easily recognize him in the platoon! Wearing a helmet with the colors of the energy drink multinational, with the signal of the bull, this former specialist in mountain skiing stands out from the rest of his cycling teammates, dressed in the colors of his team from head to toe. Anton Palzer is even the forerunner of this trend, that of private sponsors superimposed on the members of the professional team to which the pilots belong.

Accompanied by Wout Van Aert (Jumbo-Visma) since the beginning of the 2022 season, he raises the issue of conciliation, and the emerging dilemma, between private sponsors and collective partners. Rather reserved for the larger cars in the platoon, this wealth problem, however, poses commercial problems that affect the driver-team relationship. Is a man with a separate contract and additional financial sources really similar to his peers? Therefore, this article aims to answer these questions by taking stock of the situation and studying the possible answers.

Cycling, or the art of advertising

Visibility. The watchword for branded equipment since its inception is the only explanation for runners’ clothing. Pure and selfless philanthropy that has no place in the business world, the sponsorship of a company with cycling equipment must therefore be remunerated in terms of visibility. Performance, friendliness, collective, brio … many values ​​make it possible to respond to this commitment, even if the results naturally prevail. By shining, a team strengthens the reputation of its business partners. When it sinks, it damages its brand image. Ask Festina what they think … Less spectacularly, the deletion of glass men in this first part of the season, it was obviously not to the liking of the hotel chain B&B Hotels, which promised to remind those affected of their shortcomings through the team’s director, Jérôme Pineau, earlier this month.

However, if a brand’s fame is so tied to the image that its eponymous cycling team conveys, it’s because it doesn’t just serve as a bow figure. Instead, it covers all the runners’ tunics of his name, from the chest to the shorts, not to mention the appearance of sponsors and manufacturers of additional equipment on the shoulders or cuffs. Today, this effect has grown so much that it is even seen as a privilege to have a flawless national champion jersey, as is the case with FDJ riders.

Therefore, a cycling team is perceived as a great advertising tool by brands. Their business plans even tend to incorporate general recruitment and training goals. If Romain Bardet has decided to leave the AG2R-La-Mondiale, it is mainly because of the pressure of the sponsor on the systematic participation of the French in the Grande Boucle. Similarly, UNO-X’s land-use strategy, which only installs its petrol stations in Scandinavia, excludes the hiring of any runners outside this perimeter of the globe.

As such, this demonstration of the omnipotence of trading partners seems to be part of a logic diametrically opposed to that of private sponsors, to the point of seeming incompatible. And yet, this latest phenomenon is increasingly facing the platoon …

The exception: the private sponsor contract

From advertising to personal sponsors, the long history between capitalism and cycling

In fact, while private sponsors are nothing new in cycling, as they are in sports in general, they are nevertheless proving increasingly intrusive in the appearance of athletes. In the past, it was just a matter of recording commercials, such as an Eddy Merckx extolling the benefits of Ariel’s powder washing machine, or a Bernard Hinault quenching his thirst for Perrier. Today it is a matter of embodying the brand, of becoming a muse. Therefore, physical support goes far beyond the perimeter of film dishes to become part of everyday life, in every public performance.

If this capitalization of the sport of cycling still escapes the humble members of the team, it does not spare the champions. The lush Peter Sagan was one of the first victims. Beloved by the sponsors for his over-sympathy and charisma with the general public, the Slovak prodigy had been invited by an associated brand to wear a motocross mask on the podium of the Tour de France, following his stage victory in Longwy, the 2017. The advertising thus offered was so huge that it still carried the labels on my glasses.

Peter Sagan and his motocross mask, at Longwy at the 2017 Tour de France

More discreetly, others opt for a style of clothing adapted to their daily life, but with a subtle brand image. Alongside Groupama-FDJ, David Gaudu stands out, constantly dressed in the colors of Le Coq Sportif when he goes “civilian”, or Thibaut Pinot, associated with Oakley glasses and Giro shoes for connoisseurs of cycling equipment.

However, these different accessories and clothing do not oppose the advertising of the team’s sponsors as they do not replace it. They just overlay it. In this way, private sponsors and collective partners can reconcile perfectly from this angle. But things get complicated when the private sponsor goes to a space usually reserved for the promotion of training partners. This is the case with Red Bull. By investing heavily in extreme sports, which therefore require all kinds of protection, the Austrian company has naturally embedded itself in these modern pectorals. Better yet, targeting “small sports,” unknown to laymen, Red Bull has developed a method of commercial control, imposing its law on promoters. In this way, the brand of energy drinks was able to take precedence over the other sponsors, thus acquiring the primacy.

Cycling is just the opposite! If Red Bull has invested heavily in cross-country cycling or mountain biking, it’s still just tiptoeing. Today only three riders have contracted with the brand: Wout Van Aert and Anton Palzer, as mentioned in the introduction, but also Tom Pidcock (INEOS-Grenadiers). All three have one thing in common: they come from an off-road world, namely cyclocross, downhill skiing, and mountain biking. It is also through these disciplines that the connection between man and brand was made. So on the road, Red Bull is not like home, which is why its intrusive methods pose problems.

A delicate conciliation between training partners and private sponsors

Hiring, the key to conciliation

In fact, the helmet is usually reserved for the colors of the formation, thus completing the tunic from a helicopter view. In the Tour de France, it even highlights the formation at the top of the team classification adorning itself with yellow. Therefore, these customs seem to be clearly inconsistent with the appearance of the Red Bull logo in the middle of “this advertising space.” This confrontation of two competing strategies thus leads to a Gordian knot between the training partners and the potential private sponsors. 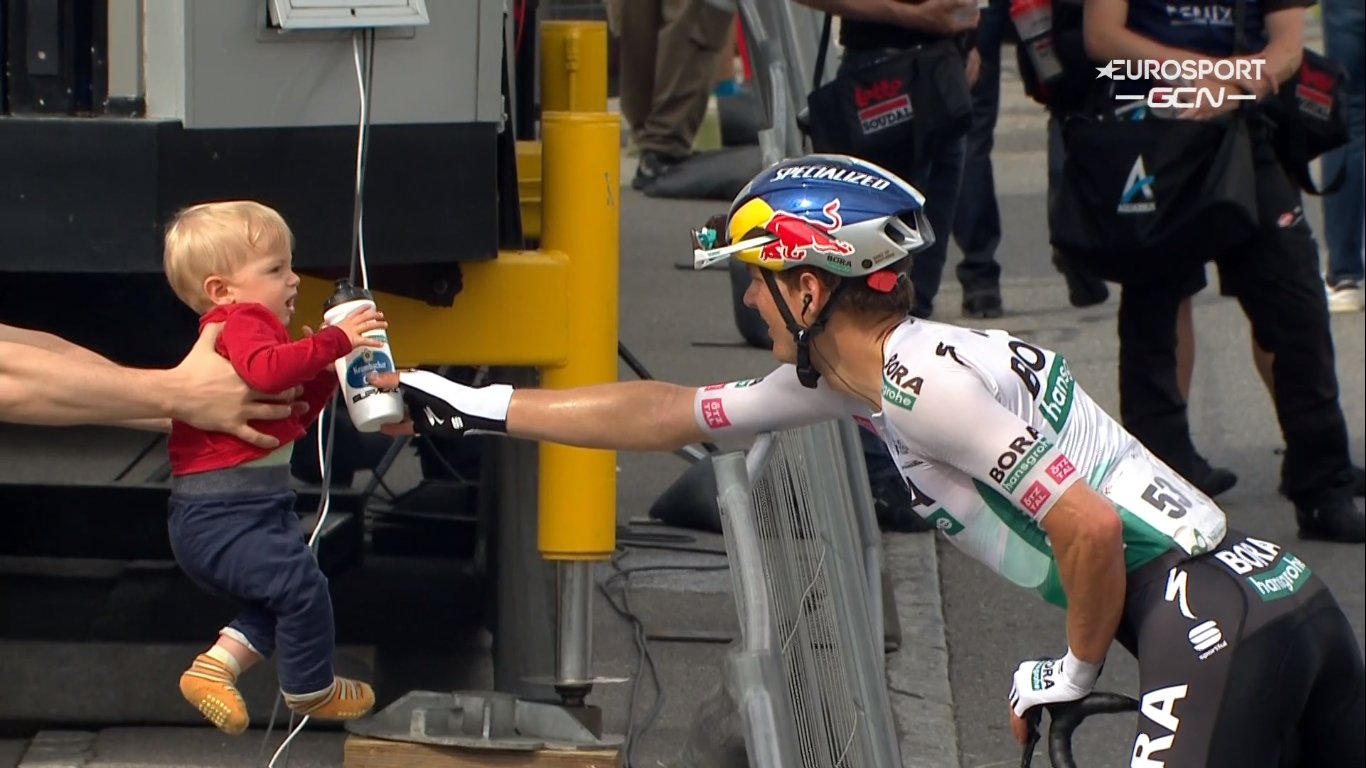 In fact, the result is necessarily legal. In marketing and sponsorship, any commitment is contractual. The contract is omnipotent, it dictates what is obligatory and optional, with the consent of both parties. However, in this game, as the runner is mainly committed to his training, it is his professional contract that provides for the modalities of conciliation with his private sponsors. The terms of the contract remain at the discretion of their author, so they vary in each situation.

That’s why Wout Van Aert and Anton Palzer can wear their Red Bull helmets, but not Tom Pidcock, who only reserves them for cross-country cycling and mountain biking. In the case of Anton Palzer, one can easily imagine that this privilege was granted to Red Bull for economic reasons, as the Austrian company largely financed the re-education of his foal. In contrast, in the opposite case of Tom Pidcock, one can suspect a reluctance of INEOS to associate its brand image with that of Red Bull, with a sultry and controversial reputation with its market.

However, the unprecedented nature of the introduction of private sponsors in spaces usually reserved for training members tends to redefine the operation of the sport of cycling. If runners are alone when they raise their arms, their victories are systematically the result of collective work, from which they simply reap the fruits. If this phenomenon of cross between private and collective partners continues and is amplified, the place of the champions in the squad could be evolved, in one direction or another. Would more private sponsors and less support for collective partners strengthen the leadership of these men or would they tend to marginalize them from their peers? These contrasting prospects are equally worrying and underscore the need to protect sport from market excesses.