Announced almost two years ago, the return of the lion mark to the main resistance category will take effect this July 2022 at 6 Hours of Monza.

You may have missed it, though the Peugeot 9X8 was present at this year’s 24 Hours of Le Mans. Yeah yeah ! Well almost. Failing to line up on the track, the tricolor hypercar was on display in the heart of the village on the Sarthois circuit, although unfortunately it was not in its final version.

The approval of such a prototype is planned for five years, which further freezes its design, the lion brand preferred not to rush to return to competition. And if the “real” car was not shipped at the time, two of the first real copies are under construction these days. and the logistical effort is concentrated in a punctual arrival to the 6 Hours of Monza. The Italian round of the World Endurance Championship, which takes place from 8 to 10 July, will be the baptism of fire for the heiress of 908.

Therefore, the 9X8 is preparing to finally answer questions about its competitiveness in the face at Toyota, Alpine and Glickenhaus. The hybrid prototype already put an end to a certain suspense a few weeks ago through an official presentation organized outside the tests at the Portuguese circuit of Portimão. The Frenchman LMH (Le Mans Hypercar) appeared for the first time without the slightest camouflage and put an end to months of speculation about his back.

After announcing from the draft project to return to the highest level of competition that his car would dispense with a rear spoiler, the Sochaux manufacturer did not back down. “The solution is simpler and cheaper,” argues Olivier Jansonnie, the technical director, met at Le Mans.

The 9X8, equipped with a 2.6 biturbo V6 mesh with the rear axle and an electric motor that animates the front axle is therefore definitely dispensed with this appendix, but is considered essential. “It comes with a slightly more advanced mass centering than usual and four wheels of identical width,” adds the former BMW Motorsport member.

These early (and rare) images also show a largely chalky drifting back. A favored option for Peugeot to comply with the aerodynamic window imposed by the regulations and in particular defined by a ratio between aerodynamic force and 4: 1 drag.

In detail, headlights and mirrors are significantly overhauled compared to those discovered during the first appearances of the car to meet the approval limitations. As for the colors, there are no big surprises. The gray already highlighted by the concept car is still ubiquitous. 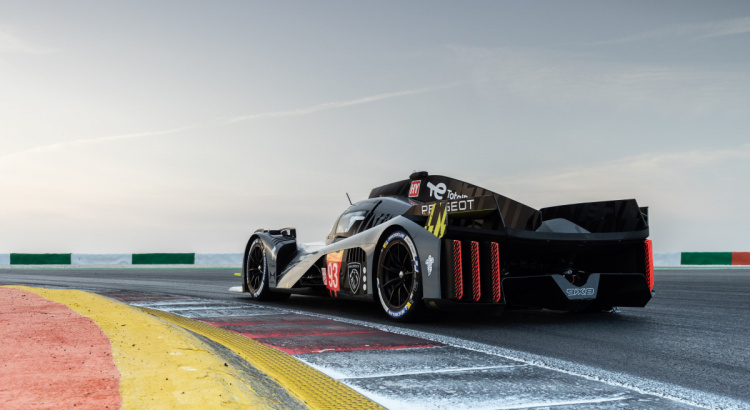 A few days after naming his sixth driver after the departure of Kevin Magnussen (finally remembered by Haas in F1) in the person of James Rossiter, Peugeot Sport also announced the composition of its two crews outside the 24 Hours of Le Mans 2022.

The British, already a member of the team as a reserve and involved in development via the simulator, joins the American Gustavo Menezes and Loïc Duval in # 94. The # 93 will be led by Paul Di Resta, another Briton, the Danish Mikkel Jensen and Jean-Eric Vergne. A particular distribution officially defined by the analysis of the test data, the driving style of each and the affinities with each other.

In addition to its 10,000km of tests done in recent months, the 9X8 will finally only have one three events to prepare for the 2023 season where the ruling class will also see the return of Porsche and Ferrari. Probably no less.