If Romano Albesiano had worked at Suzuki and a board of directors had asked him if a commitment to MotoGP had any relevance, perhaps the life of the GSX-RR would have been extended. But the Italian has been in the ranks of Aprilia and in the lead since Gigi Dall’Igna left Noale for Borgo Panigale. He has done everything from the manager to the director and engineer, which is his main business. Then came Massimo Rivola in 2019 and freed him from the tasks that held him back from his work developing the RS-GP. In 2022 we see the result of this duet and the impact on an Aprilia company whose improvement radiates to the entire Piaggio group. We are definitely far from the worldview and the people, expressed from Japan …

Aprilia Technical Director, Romano Albesiano is in the best position to contemplate in 2022 the dimension of the hard and difficult work started in 2015. Since last year and the podium achieved at Silverstone, the RS-GP has continued to gain momentum with Aleix Espargaro since 2017. This season the first victory came in Argentina and halfway through this title race, Noale’s men, with their driver who has always been on points at the end of the 11 races so far , are the first challenges. of the World Champion Fabio Quartararo, at the head of the provisional general classification. During this time, a Maverick Viñales at the speed recognized throughout the paddock is beginning to get used to a frame equipped with a V4, and therefore different from its culture forged with the four-cylinder in line. Yamaha.

About VinalesRomano Albesiano would like the adaptation to be done faster: what I don’t like at the moment is that only Aleix has reached the level to be on top. But Maverick is getting closer said the Italian. ” I will be happy when Maverick reaches the same level as Aleix. Then we can say that our two riders can use our bike to the fullest. We are close. It is very important, yes. That is why it is very important to bring the Maverick to the level of Aleix. Like I said, they’re very close in certain situations, but Aleix has that little extra. And clarifies: We are talking about curve entry and half curve, especially on the fast lap. We have to work on this aspect, it is a mechanical aspect “.

Still, being successful in the most exclusive sport motorcycling competition is a source of motivation for all a manufacturer’s staff. Romano Albesiano is expressed in Speedweek: ” I am very happy with the support we receive from the company, especially from the president who has always supported us. All in all, I think it’s a wonderful story. We have suffered, we have suffered and we have suffered again to finally reach a good level. I am very happy that the efforts have been rewarded in the end. We had to change so many things, there was bad luck and we probably made bad decisions. But in the end, if you persevere over and over again … “.

He adds: ” I am very happy for the Piaggio group and the people of Noale, as well as for everyone who works on the factory assembly lines, for everyone. What is happening is very, very beautiful A synergy, an involvement, a feeling and a recognition towards a set so valued in the company that a cold board of directors that works only for an anonymous minority that swears only by the figures and curves that indicate the its added value you will never want to take into account. 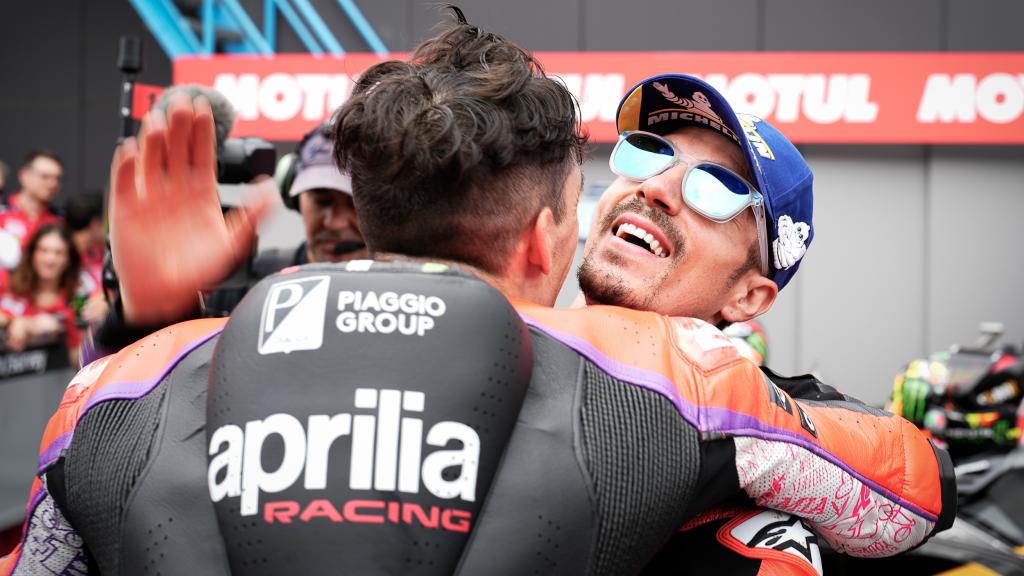