At KTM, we continue to shop for 2023 and beyond. After formalizing Jack Miller alongside Brad Binder on his official team, we take on the Tech3 partner. Sure, Pol Espargaró will have a place but it remains to be seen who will enjoy the second RC16 orange. Currently, the two Hervé Poncharal riders are Remy Gardner and Raul Fernandez, former Moto2 World Champion and current runner-up. A curriculum that does not give the expected results, much less because we are in a crisis of confidence or even vocation. One of the two will not be part of the landscape next year. Maybe not either. What is certain is that Raúl Fernández will go elsewhere. Pit Beirer, who had done so much to keep him within his brand, no longer hides his feeling that he was wrong about the Spaniard …

It is a confession that will no doubt challenge so many Danilo Petrucci thatIker Lecuonathe two former pilots ofHervé Poncharalwho had learned in the middle of a training session of the Styrian Grand Prix that Raúl Fernández they would arrive on their Tech3 team in 2022. pit beirerthe sporting director of KTM he had thus hastened things to see how his Spanish pilot was approaching dangerously Yamaha via Razlan Razali. Today he clearly regrets his haste, but does not deny his philosophy. So that’s because he saw his official pilot Miguel Oliveira talking to Ducati Gresini who was convinced that the arrival of Jack Miller⁇

But back to the case of Raúl Fernández. In motoring-total, pit beirer is clear on the subject: we exercised an option that I now regret “, admits the sporting director.” We thought we had made such a fantastic journey together. We felt like it was ours and we didn’t have to give it away “It must be said that, so far, Raúl Fernández In fact, he was the son of the Mattighofen brand: in 2016 he finished third in the Red Bull Rookies Cup. In 2018 he won the Moto3 Junior World Championship with a KTM. In 2019 he played his first full season of Moto3 with Aspar-KTM. In 2020 he celebrated his first two race victories in the Ajo-KTM team. In 2021 he won eight Moto2 races as a rookie. The road to one of KTM’s MotoGP teams was a must.

KTM: ” Raul Fernandez and Remy Gardner don’t seem to be moving in the right direction, they both gave up”

This failure is also a lesson for pit beirer : ” it was also an apprenticeship for me this year. You need people who believe in the project and give it their all. It was definitely not the right mix. If you’re attracting such a young rider to this class, it’s good when there’s an experienced leader in the box. We had to learn it the hard way An assessment of the situation that also raises questions about the second pilot running at Tech3, specifically Remy Gardner.

And in fact, the Australian is no longer sure of its durability on the RC16. The same Beer warn: he lost faith and said that it is not possible, that the bike does not work, that it is not fun and maybe next year he will run the World Superbike Championship. He just gave up “Despite this:” of Mugello, we have to return it. Now he understands, fights and is eleventh. He understood that it was necessary to advance millimeter by millimeter “.

pit beirer assess the situation as follows: Raul Fernandez and Remy Gardner don’t seem to be going in the right direction. They both surrendered. We talked a lot with them and in Barcelona there was an eleventh and a 15th place ”. Is: ” they had too high expectations and perhaps overestimated the Moto2 class for themselves. They thought that in MotoGP they needed a bike where everything went by itself. But just look at where Quartararo is and where the other three Yamahas are circulating. It is the pilot who makes the difference. We’ve been telling them for 14 days that they have to fight. As newcomers, they have to fight for a championship spot. And if you get a point, two points should be the next goal. Gardner got it now The latter, therefore, would still have a chance, unlike Raúl Fernández who is heading towards RNF Aprilia with a priori Alex Rins as a team member. 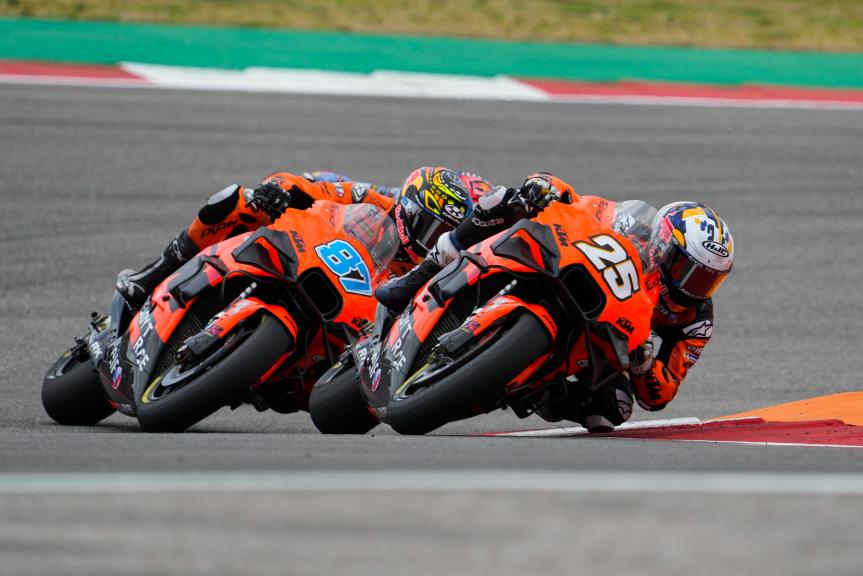