Miguel Oliveira managed to be the protagonist of a non-event in Germany in a press conference announced with great joy on Thursday, at the Sachsenring. The agenda was the future and after almost half an hour of talking, it emerged that the Portuguese would not be on the official KTM team in 2023. An obvious thing after signing a two-year contract with Jack Miller, while Brad Binder has a lease until 2024. Everyone was waiting for the news of an installation at Gresini Ducati. But for various reasons, nothing has been leaked on the subject. And for good reason, the obstacles are still numerous …

where will he go Miguel Oliveira in 2023? The question also applies to many of his teammates, who all the more look at the same places as him, as they are the only ones available in the paddock … But with this press conference for nothing, the quadruple MotoGP winner with KTM he drew attention to himself. It will be recalled that it is directed by his father Paulo, who opened up in the Speedweek columns about what looks like a mess.

First, there was, according to our own paddock sources, a memory KTM in the fact that Miguel Oliveira he could not embark on the revelation of his future alone, because of his contract with the brand that forbids him to stand out another manufacturer. Which would have been the case with a mentioning ad Gresini Or another. So we had to step back. But back to the beginning: what happened Miguel Oliveira planning to leave KTM ? Her father and manager say: we negotiated with KTM in Argentina, it was the option to continue with KTM “, said Paulo Oliveira. ” Miguel’s goal was to stay with Red Bull KTM for another four years, almost the rest of his life.. But in the end it was not possible “.

” In May we received a proposal that Miguel return to Tech3 add. “However, we felt that Miguel deserved his place on the Red Bull factory team thanks to his results, not only in MotoGP, but also thanks to his past successes in Moto3 and Moto2. “. And make this assessment concrete that will not make everyone smile …” Going back to Tech3 is like a downgrade. Miguel can’t accept that. I think it’s time to stop at KTM “.

However, the Portuguese clan does not close the door: ” we are still studying this option because we have a very good relationship with Pit Beirer and Stefan Pierer. The last six years with KTM have been fantastic, resulting in many successes “So we keep the option KTM under the sleeve whileAleix Espargaro revealed in Germany that Aprilia was negotiating with Oliveira. Which gives us two clues.

Miguel Oliveira 2023: “ we also spoke with Alberto Puig from Repsol-Honda”

And the third one we thought was the first one and that is that of Gresini Ducati ? Well, there is a concern and no less important. Autosport reports that the main obstacle is financial. Indeed, Ducati does not want to pay Oliveira’s salary, because the 27-year-old driver does not live up to the Italian brand’s current philosophy of promoting young talent. In this trap, Paulo Oliveira to answer: ” Miguel doesn’t run for money. It’s important to reward the pilot’s skill, of course. But money is the least important part of this business “.

Finally, there is the problem of Hyundai … It is a personal sponsor of Miguel Oliveira and Ducati, which is part of the Audi group, finds it hard to see that this brand appears in the suit of a rider riding one of his Desmosedici. By contrast, one of the supporters of Gresini is the Portuguese brand OLI, specialized in cooking. In short, we have not yet emerged from the sand among the Lusitanians … ” We need to discuss and then see what we have in hand. And finally, it’s the pilot who decides which direction we’re going, not me Said Paulo Oliveira. ” I make different proposals, and then Miguel decides what is best for him and what he will do. I can only recommend it Ends the good slippery father: we also spoke with Alberto Puig from Repsol-Honda » 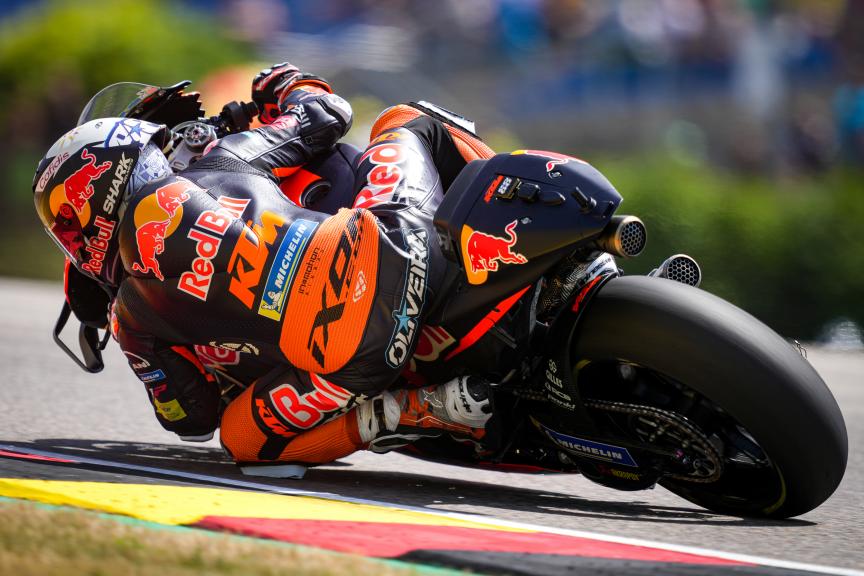 Results of the German MotoGP Grand Prix at the Sachsenring: