The first leg had acted as a trigger. Therefore, Martin Terrier wants to meet Saint-Étienne on Saturday, April 30, as part of the 35th day of Ligue 1. On December 5, he crushed the ASSE solo by scoring a hat-trick, during a unilateral party (5 -0). Since then, Stade Rennes (3rd) has interfered in the fight for qualification for the Champions League. Transformed this year, Terrier has established himself as one of the key men in the Breton team.

From these three goals, the 25-year-old striker walks the water: Martin Terrier is currently the second highest scorer in League 1 (21 goals) behind Kylian Mbappé (24 goals). He had only scored 23 in the league in four and a half years so far … Most of all, he has scored in each of his last seven games and is just two units away from equaling the goal record in a season in the top tier. . a player from Rennes. An outbreak that more people were expecting.

However, those who saw him evolve into the youth categories of LOSC, his training club, imagined him one day occupying this rank: “It was always a step forward and the ability to always make the right decisions. He was upstairs“, emphasizes Mickaël Foor, his coach for four years when he started in Lille in 2004.

“With 17-18, he was one of the best players on the offensive front. As for the finished gesture, it was surgical. He is very smart. In fact, it stinks in football“Confirms Stéphane Dumont, current Guingamp coach and Martin Terrier coach with Lille U19 for three seasons.”It had great potential. What he realizes today is the logical continuation“launches Sébastien Pennacchio, who had played alongside Terrier for a season on the LOSC reserve team.

7 – Martin Terrier has scored in 7 consecutive Ligue 1 games, only Hervé Guermeur has had a longer streak for Rennes in the top flight (8 in April-August 1972) since Opta analyzed the data ( 1950/51). Untied. #SRFCFCL pic.twitter.com/dckFxKiatL

Considered a great hope in his Ligue 1 debut with Lille in 2016, at the age of 19, he was recruited by Olympique Lyonnais, who smelled the right shot. But beyond that raw talent, there is discretion on the pitch and a certain “mental deficiency“which are observed, as described by Foor”.He could play a great game and be completely absent in the next one“He explained that he stayed close to the player after his professional debut.

“It was really hard for him to get hurt. He was like that in everyday life, and he was noticeable on the field“Dumont stressed. Naturally gifted, Terrier was not enough.”killer“Not enough”bad“On the pitch,” recalls the Guingamp coach.

In Lyon, it doesn’t fit. “Terrier walks emotionally. OL is a team that looks at the navel and there is no room for the emotional“explains Gaël Danic, who experienced difficulties in integrating into the Lyon dressing room during his time in the Rhône (2013-2015). noted “click“experienced by Terrier in Rennes between its first season last year and the 2021-2022 season.

“Rennes is a club with healthy pressure. Foor explains. The club wants results but the players have time. So, bottom line is that we’re really looking forward to it. “. Gaël Danic agrees: “Rennes is a family club with high standards, this is what Terrier needs“. 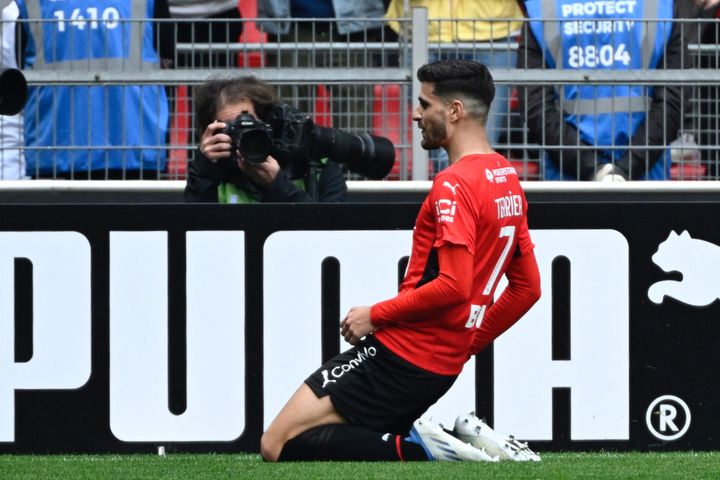 Close to the locker room, very close to Nayef Aguerd, Terrier also has the confidence of his coach Bruno Génésio, his first coach in Lyon and especially Florian Maurice. The latter, who had taken him to the OL, before recruiting him when he arrived in Rennes, is a privileged replacement. In addition to this favorable context, the striker is also “become a true professional every day“, according to Dumont.

A big fan of video games, he had told her Western France After being number one in the FIFA World Cup, Terrier explained that he had reduced his number of playing hours.I changed my way of doing things a bit: I played a little late at night in front of the screens, not the best. (…) Now I prefer to do a small session in the afternoon to play calmly, and in the evening to rest and sleep earlier.he had told her Blue France in February.

After reaching maturity, Terrier blooms in the field. “Once he has gained confidence, he goes very fast with his qualities“Next to Gaëtan Laborde, Rennes No. 7 is still on the far left, but is playing free electrons, to the point where he is often present in the opposite zone.”He proved to himself that he could be a great goal scorerDanic points out.

20 – Martin Terrier has scored 20 goals in Ligue 1 this season, no Rennes player has scored more in a single season in the 21st century. Famolenc. #RCSASRFC pic.twitter.com/SVqlEHST4b

“He became aware of his potential, which he now fully expresses and has gained maturity“, said Génésio last weekend, after the victory of Rennes against Lorient (5-0) where he scored a real goal number 9. With his 21 goals in Ligue 1, the striker has consolidated like the one of the safe values ​​of the championship. A new status to confirm the next season.

What do you aspire to see above? “At the moment it is fine in Rennes. He knows how to take advantage of where he works. I’m not sure I want to go anywhere else right now“Explains Mickaël Foor. Can the former Espoirs international (13 teams, 7 goals) dream of playing for France? Génésio believes:”If he continues, he has the qualities to have an international future.“Martin Terrier can already boast of having surpassed a milestone, sporting and mental, this season.