MG intends to give a blow to continue its expansion in Europe. With the electric MG4, a model designed and developed for the Old Continent, the Chinese brand has big ambitions. A completely new model that could shuffle the cards into compacts. Exclusively, we have already been able to take the wheel of the latest development prototypes.

After three SUVs (thermal, rechargeable hybrids and electric) are put in search, it’s the turn of the electric MG4, to enter the arena. An important model for the brand, which aims to achieve hitherto unknown sales volumes. A 4.28 m sedan, designed and developed mainly for the needs and expectations of European customers. It is also the first model based on the unprecedented platform developed by the parent company of the brandand, SAIC Motor.

A modular technical base (a first in the group) called MSP, which can be used for very different models (wheelbase from 2.65 m to 3.10 m). Interesting in its design, it can offer, in the long run, the unprecedented possibility of changing the battery during the life of the vehicle (currently the MG4 is not concerned). She will be able to pass too with a voltage of 800 Vthus offering optimal load power in the future.

It was during the final stages of development, carried out in Europe, that we were able to take, exclusively the steering wheel of this compact for the less ambitious. In fact, a group of engineers is currently making a road trip of approx 35,000 km throughout Europe, to fine-tune the different electronic components of the vehicle. It was during their stopover in Rome that we went to meet them. This MG4, certainly very camouflaged and still devoid of certain aerodynamic appendages, it is quite short (4.29 m), but rather wide (1.87 m). An impression reinforced by the marked shoulder of the body line.

On board, the MG 4 offers an updated design. The dashboard, horizontal and particularly aerial, creates a remarkable space in the front seats. The impression of traveling on board of a real minivan, an extinct species, it is very real. It is still early to measure manufacturing quality, our prototypes still do not benefit from their final materials. But relying on the very successful interiors of current models of the brand, and the few details detected on board the MG4, the perceived quality level must be satisfactory.

At launch, this MG will be available in two versions. The first, with a 51 kWh battery, has a 170 hp electric motor and promises a range of 350 km (WLTP). The second opts for a 64 kWh battery, develops 204 hp and would be capable to make 450 km journeys. But the brand doesn’t intend to stop here, and a four-wheel drive version is already on the charts.

What the brand has not yet officially confirmed is that this version will be attributed a hitherto unknown power and performance in the segment. We are talking about more than 400 hp and 0 to 100 km / h in less than 4 seconds. Another indiscretion, a larger battery would be under study for this MG4, which will then be able to to cover the 500 km in autonomy. If the brand still doesn’t talk precisely about load power, it promises instead recover 80% of the battery in 30 minutes. Therefore, we can count on 135 kW recharging with direct current. To be confirmed.

Habitability remains an important argument for electricity, benefiting from a very specific interior layout. This MG4 is no exception to the rule and goes even further offering more space, on all axes. If legroom is always convincing in a zero-emission vehicle, the roof guard suffers from the location of the batteries. Lands and bases generally high. But that is not the case here. The MG4 benefits from a particularly thin battery (11 cm high, compared to 14 in an ID.3), to offer remarkable roof protection, much more generous than on board its German rival, still 6 cm higher. 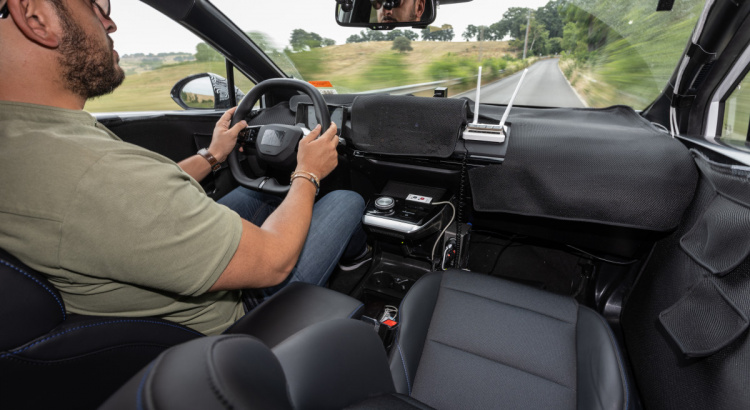 An electric and economical MG4?

It was in the city, in the labyrinth of the Italian capital and on the surrounding roads, where we were able to briefly take the wheel of this compact, between two measures taken by the engineers. Right in the center of Rome, between the Colosseum and the entrance to the Vatican, the cobblestones, the tram rails and the very uneven surface of the road have paradoxically stood out. the very good comfort level of this MG4. Progressive damping (conventional spring, piloted suspension is not offered) in addition with rims in a reasonable 17-inch format. The light direction, good peripheral visibility and above all an ultra-short turning circle make it a pretty talented city girl.

Outside the walls of the Roman city, the MG4 benefits from the solid performance that can be expected from an electric vehicle. (we are testing the 64 kWh and 204 hp version). On winding roads and at a more dynamic pace, the Chinese compact reveals at least pleasant behavior. Taking advantage of a particularly low center of gravity andWeight distribution 50:50, this rival of ID.3 and Mégane E-Tech has nothing to envy to its competitors, quite the contrary. Led by a precise front axle, controlled by a fairly direct, stable and quite agile steering, the MG4 surprises and reassures at the same time. More attractive to lead than an ID.3 but without offering the well-meaning dynamism of the French car, this newcomer demonstrates an unexpected mastery of the road.

An MG4 that therefore looks well-born, and that runs the risk above all of throwing a huge stone at the satiety of electric compacts in Europe. In fact, the brand aims to deliver an access ticket for less than € 30,000. A price that should go up € 35,000 for the large battery version and already generous equipment. A strong argument, which places this MG4 at the prices of rivals in the lower segment (Peugeot e-208, Renault Zoé) or even compared to traditional compact thermals.