Every moment has its own emotion. From the yellow coronation of Jonas Vingegaard, the green coronation of Wout Van Aert or the tricolor liberation of Christophe Laporte, the Jumbo-Visma is entitled to all moods. First consternation, as was the case at the heart of the climb to Cap Blanc Nez. Then admiration, when Jonas Vingegaard took the yellow jersey at the top of the Col du Granon. Then the congratulations, renewed on each podium of the Champs Elysees, or almost (only the white jersey has escaped the Jumbo-Visma). And finally, unfortunately, doubt. At the press conference, questions arose. Jonas Vingegaard, as usual, remained calm. ” I can guarantee you 100% that we are clean said the Dane simply. Questioned in turn, Wout Van Aert lost his cool. ” Shit question snapped the instigator.

Then everyone immediately highlighted the considerable work done behind the scenes, upstream. “We do courses at altitude and we go very far during these courses. We do our best in terms of equipment, food… That’s why you have to trust us. » said the yellow jersey himself. So the moment of explanation has arrived. In collaboration with Bert Blocken, a professor at the Technical University of Eindhoven (Tu/e) and Ansys, a software publishing company, Team Jumbo-Visma has become one of the pioneering teams in digital simulation. Focus on the “marginal gain” of the year, with Thierry Marchal, director of healthcare and sports solutions at industry leader Ansys.

Digital simulation, an industrial technology at the service of cycling

In summary, numerical simulation allows “ optimize performance through aerodynamics “, as summarized by Frédéric Grappe, director of the Performance division within the Groupama-FDJ formation. In fact, it consists of solving enormous systems of equations, with tens of millions of unknowns, at the heart of which is Newton’s fundamental equation, which states that the resultant force F exerted on a material point, of given mass m, is the same. to the product of the mass of the point and its acceleration a. 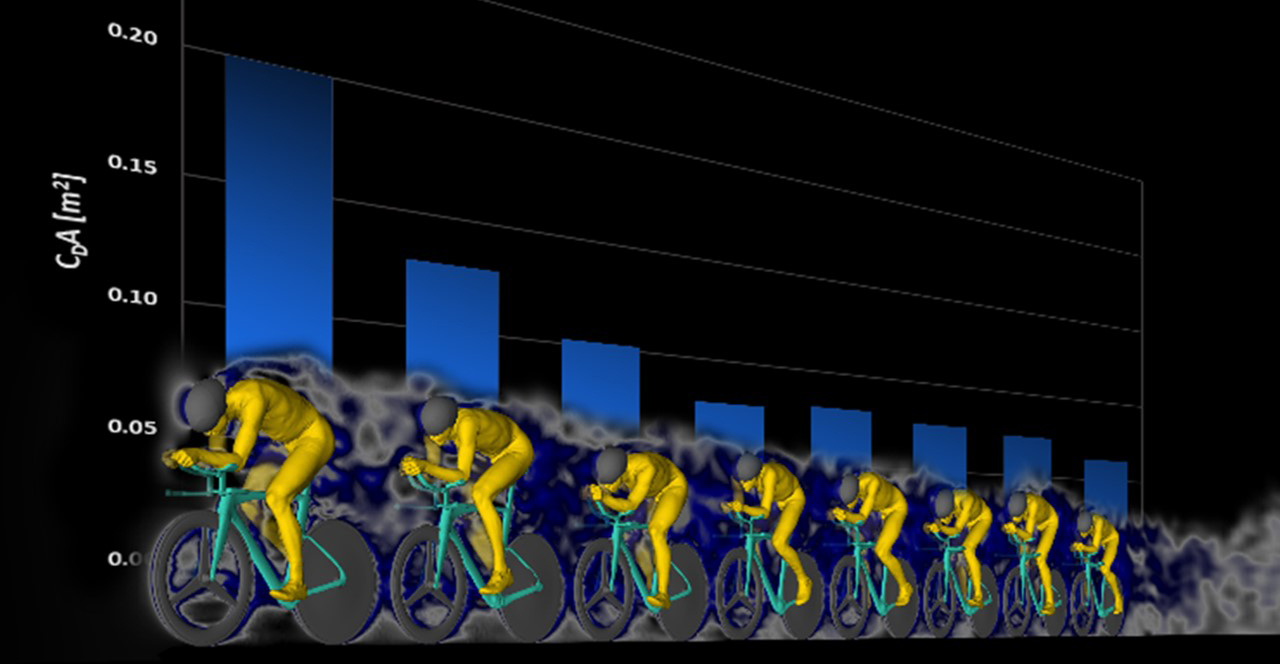 In other words, the greater the speed, the greater the resistance that the air opposes to the progress of the runner. It is even estimated that when riding on flat ground in calm weather at more than 40 km/h, more than 90% of the resistance that the cyclist must overcome to move forward comes from air resistance. “, as Thierry Marchal tells us. So it’s no wonder that the automotive and aerospace industries have embraced numerical simulation for many years!

Thus, by multiplying the experiments at the speed of a processor, this method leads to the design of a predominant model, varying according to the conditions (climate, slope, speed, etc.). Finally, this study allows the runner to fine-tune his penetration position in the air in order to increase his speed while developing the same power. Then the explanation of the Jumbo-Visma double at the end of the Rocamadour time trial takes shape.

The differences in drag coefficients in a platoon illustrates the need to optimize this point / Credits: Ansys

Is digital simulation the determining factor in this win against Tadej Pogacar (UAE Emirates), Geraint Thomas, Filippo Ganna (INEOS Grenadiers) and others? Obviously, it would be wrong to make this the only explanation for this feat. As Thierry Marchal humorously points out, “ even taking full advantage of this technology, I couldn’t win the Tour de France myself: what these athletes are doing is just phenomenal.” But if the digital simulation doesn’t do the trick, it contributes noticeably.

In fact, air resistance is extremely sensitive to variations in aerodynamic drag, similar to that of a boat in a river. However, as our speaker explains, the purpose of the numerical simulation is to identify and locate the origin of each of its components “. Once known, these can be targeted by changing the athlete’s position on their machine. Then “flaws and gray areas” are discovered and brought to light, as Frédéric Grappe explains.

And the results are not long in coming. ” Even a reduction of a few percent could translate into a saving of 1-2 seconds or more per kilometer says Thierry Marchal. On the scale of the 40 kilometers of the final time trial of the Tour de France, this gain could therefore exceed a minute. Unfortunately, for reasons of confidentiality, we have not been told the exact benefit of the digital simulation on the performance of the Team Jumbo-Visma pilots.

The digital simulation, a symbol of Jumbo-Visma’s investment

In fact, the triumph of the Jumbo-Visma in the Tour de France is the result of a multitude of sources of progression gathered. As Jonas Vingegaard explained in the introduction to this article, the Dutch team is looking for performance gains on all possible fronts, be it power supply, altitude familiarization or penetration into the air. . And his work on the latter point is particularly representative of the latter point, completing the metamorphosis of cycling from a purely physical discipline to a scientific realm in its own right. 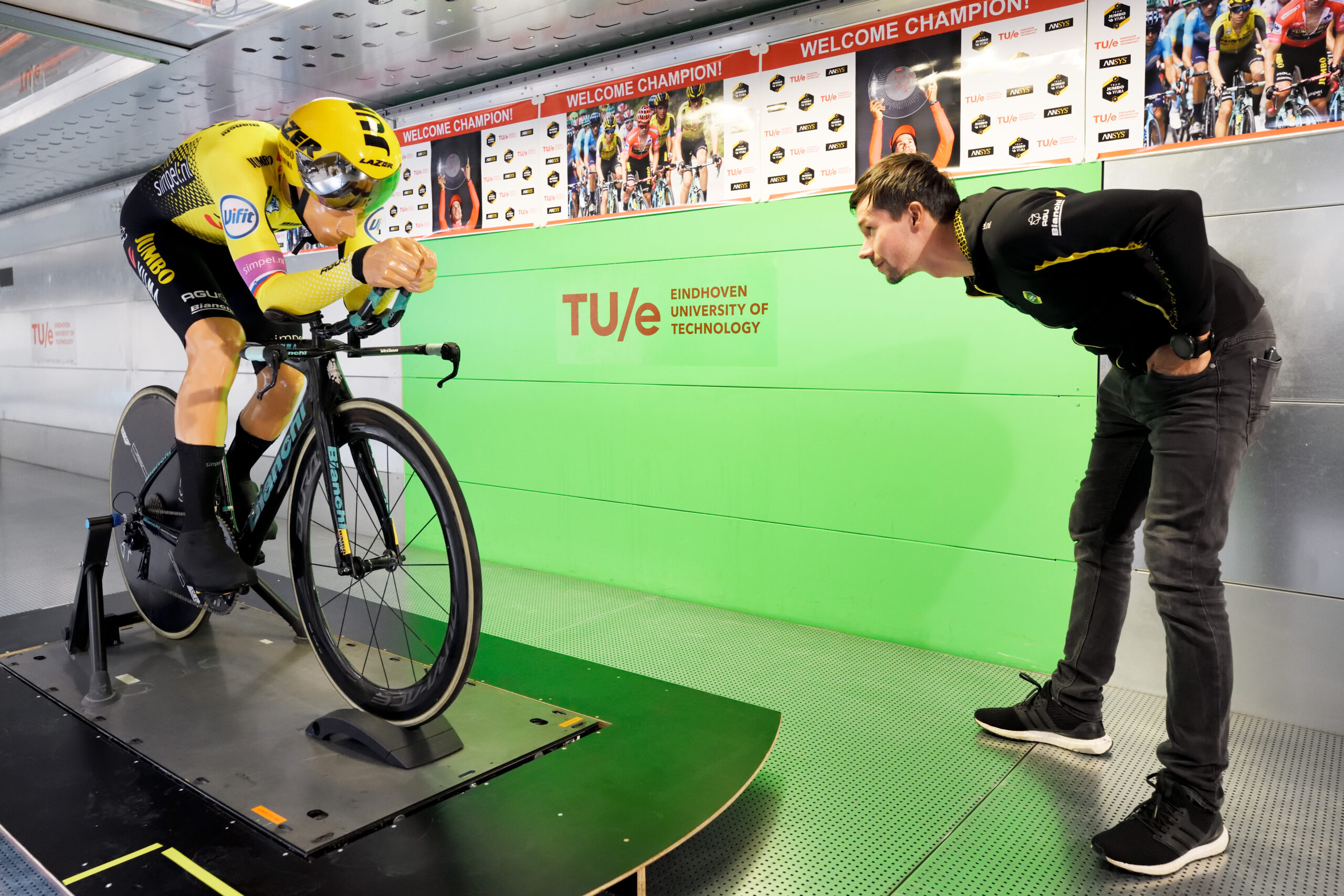 Indeed, Thierry Marchal reveals in this sense that Team Jumbo-Visma has come to reproduce in experiments the exact morphology of its main pilots, in order to take into account the smallest geometric detail of each person’s body. He even adds it for Wout van Aert and Primoz Roglic, a life-size dummy was created from this scan to validate the numerical simulation with experimental studies in the wind tunnel. “. Finally, the Dutch team has not stopped checking the progress made on the road, being particularly attentive to the feedback of its drivers. As summarized by Thierry Marchal, ” the last word always goes back to the cyclist “. And one could add that the successes thus systematically fall into the arms of the Jumbo-Visma.

However, digital simulation is already being emulated. Frédéric Grappe’s intervention in this article thus illustrates Groupama-FDJ’s commitment to Ansys, as another outstanding customer of this technology. However, with his 4e place in the final general classification, David Gaudu is also the author of a remarkable performance in the Tour de France. Isn’t this further proof of the effectiveness of digital simulation?