Autumn 2018. At the São Paulo Stadium, in front of 30,000 people, the Brazilian team of twins Sancery and Laurent Bourda, faces the Maori All Blacks. If in the end the latter won quite easily (3-35), one of the highlights of the match was the crazy dominance of the Carioca scrum against the Kiwis. And when they call you domination, it was actually humiliation:

You probably remember this amazing sequence. Four years have passed since that meeting. Where has Brazilian rugby been since then? In fact, the Seleção were at the peak of their rugby at the time, and since the Covid crisis, they have gone downhill and struggled to get back to the level they were at. Simon Bienvenu, player trotamón, former member of the Cobras team (franchise from São Paulo in the SuperLiga Americana, South American championship), detailed the state of Brazilian rugby today.

Particularity of the SuperLiga franchises to better understand this competition: there are six franchises spread over six South American countries. The Cafeteros of Medellín in Colombia, Selknam of Santiago in Chile, Jaguares XV of Buenos Aires in Argentina, Penarol of Montevideo in Uruguay, Cobras of Sao Paulo in Brazil and Olimpia Lions of Asunción in Paraguay. Franchises are national teams in disguise. Almost all players are international in the country in question.

The particularity of Brazil, then, compared to Argentina, Chile and Uruguay, all three qualified for the World Cup, is that it does not only have players from very privileged backgrounds. Elite sport in the first mentioned countries, Brazil has players from the favelas in its ranks. In addition, rugby is used by these players to help the inhabitants of these neighborhoods:

There are projects that are carried out in the favelas, of social integration, where rugby is used as a vector of integration. Which made the players to be in the team as professionals. Our audience, therefore, was not high society at all, but on the contrary very popular.

Despite the projects carried out, football obviously remains the national sport, and the pool of rugby players remains weak.

There is a national championship called the Top 12. Among the 12 teams present, there are about 3 that are of a good standard and include Brazilian internationals and therefore Cobras players in their ranks. The rest is pretty low. There really is a big difference in level. The pool is not really important. There are about 40 players at most who play rugby with salaries on the line. But these salaries are very small. They don’t allow players to build their lives with them.

At Cobras, the team was quite young for two reasons: either the players went to Europe with a gateway to Portugal (no language barrier), to get better salaries, knowing that some pillars have done well and are currently playing in France Or others simply stopped rugby to devote themselves fully to their most profitable professional activity.

Then it is difficult for Brazil to build a competitive team. Unlike Chile, the players do not have the financial security that allows them to fully dedicate themselves to rugby, the national team is unable to maintain a long-term group and thus build a competitive team. Before the arrival of the Uruguayan coach Pablo Lemoine in Chile, the latter was behind Brazil in terms of the level of play. Since then, thanks to the professionalism of the coach, with extensive preparation for players who they bet everything on rugby, they were able to overtake the cariocas. All with substantially identical operating budgets, but completely different requirements for players… 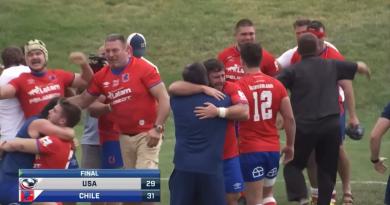 We all remember the Brazil scrum that had won the Maori scrum in São Paulo. Unfortunately, at that time he was the top of Brazil. Covid has really hurt rugby: there, players are starting the sport late. With two years off for young people who were in clubs, it was impossible to make up for lost time.

In addition, the federation bet everything for the selection in financial terms. But when the pandemic came and it was necessary to keep pushing the team, the federation, too much in debt, could not continue. The Argentine coach at the time resigned, therefore, a good part of the more or less unemployed players. Thus we began a new generation.

You would have understood. The situation in Brazil is really complicated. As proof of Bienvenu’s claim, his Cobras team finished last in the SuperLiga regular season. It is a symbol of rugby’s malaise in this country of 200 million people. Despite this, he remains optimistic. A new management team is at the head of the federation. The goal of qualifying for a World Cup in a few years remains.

One thing that impressed me: Brazilians are bodybuilding fanatics. They grow like donkeys, I’ve never seen that before. Even at Racing or Toulouse when I was Espoir, they didn’t push as much. They are less impressive than the French or the island boys, but they have incredible strength.

Frankly, you can expect anything with Brazilians. It was 30,000 to go and see the selection against the Maori All Blacks. Rugby mania can start and explode at any moment, we don’t know where or how.

Thanks to Chile’s historic classification, Brazil hopes to take advantage of the emulation that will be created in South America, to make up for lost time and regain the level it once was. With a health situation that seems to be under control around the world, an ambitious new management team and a SuperLiga that is achieving great organizational success, the Seleção can (re)become a new surprise in South America.